The Mannikin’s Pagent: The House of Small Shadows, by Adam Nevill 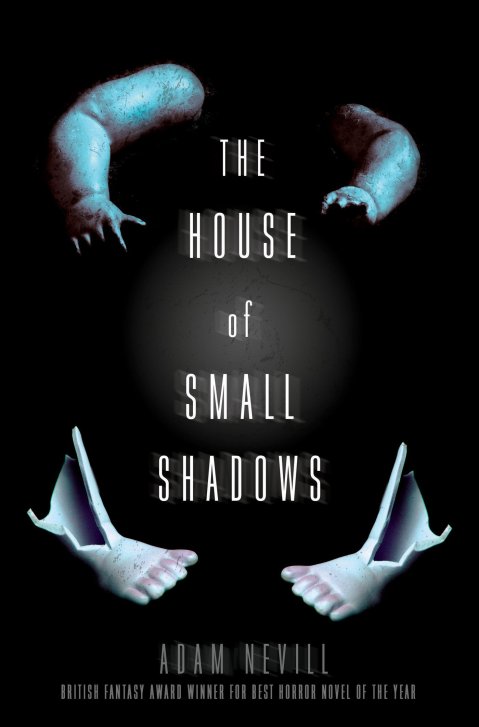 This is my second attempt to sample the work of Adam Nevill, one of the new stars of Britain’s literary horror scene. My first experience with him was with Apartment 16, a novel that seemed to have everything I could ask for (A haunted apartment! Modernist artists who flirted with the right-wing occult underground! Vorticism!). However, the novel didn’t really gel with me, so I put Mr. Nevill to one side for a time. Lately, though, I’ve developed the itch to read a little horror again, and after watching Netflix’s decent-if-truncated adaptation of The Ritual, Nevill’s third novel, I decided to give him another try.

For anyone out there unfamiliar with Adam Nevill’s work, I would heartily recommend reading this review by my old Ferretbrain colleague Arthur covering Adam Nevill’s first four novels. As it so happens The House of Small Shadows (2013), was Nevill’s first novel after the group covered in the review, and as such represents a major evolution in his work. Nevill has grown in confidence as a writer, able to deftly wield both psychology and the supernatural, and he pays homage to one of his major influences while making the work wholly his own.

The House of Small Shadows puts us in the shoes of Catherine Howard, a woman who’s had a rather hard go of things. Growing up as an adopted child in the grungy little Herfordshire town of Ellyll Fields at the end of the 1970s, she was the first choice for neighborhood kids looking for victims to bully. Matters were little improved when her only friend, a disabled girl named Alice Galloway, vanished without a trace when she was six years old. While Catherine’s parents decamped from Ellyll Fields to the north of England shortly thereafter, Catherine continued to have problems with anxiety, paranoia, and occasionally lapsing into “trances”. Even her adult life had its share of trauma; a few years before the start of the novel her life was upended when she lost her job at a television production company due to a horrific round of workplace bullying, an experience that forced Catherine to flee London altogether and move back in with her parents to recover.

However, as the novel opens in the present day, things have improved markedly for Catherine. A battery of therapists and psychoanalysts have helped her process her various traumas, she has found a new job in Little Malvern as an appraiser at a small firm under the kindly tutelage of Leonard Osberne, and she has moved back out on her own and reconnected with Mike, an old beau from her university days. On top of all that, she has been given the opportunity of a lifetime: Edith Mason, the elderly niece of M. H. Mason, one of Britain’s finest taxidermists, has contacted Osberne’s firm regarding the possibility of selling some pieces of her uncle’s work that have not seen the light of day for decades.

Catherine is duly sent to visit Ms. Mason at the “Red House”, the family’s home just outside the two-street town of Magbar Wood. With its red-brick exterior, the Red House is an imposing place, a manor in the Victorian Gothic style with windows that peer at visitors and gables that seem to claw at the sky. The inside is little better: inhabited only by the invalid Edith and her housekeeper, the imposing mute Maude, the house has become a mausoleum to the late M. H. Mason, suffused with a dim ruddy light thanks to omnipresent red wallpaper and red stained-glass windows.

As Catherine attempts to start her appraisal, she finds her efforts continuously stymied by Edith, a imperious matron right out of a Victorian novel who seems to take a particular delight in tormenting Catherine. Rather than getting to work, Catherine soon finds herself being taken on a tour by Edith of the elder Mason’s life and work. Even more than his niece, M. H. Mason was a troubled man. A pastor who lost his faith and his brothers in the First World War, he retreated into seclusion after the war to devote himself to taxidermy. His skill with preparing and posing animals grew by leaps and bounds, culminating with his masterpiece, a series of massive dioramas depicting scenes from the Battle of the Somme with every soldier portrayed by an exquisitely posed and costumed rat. But even this, according to Edith, was only a stepping stone to a far greater endeavor. With a cast of humanoid animals and dolls manufactured by hand, Mason turned to puppetry and the production of “cruelty plays”, allegorical dramas depicting the martyrdom of various puppeteers and pagans who met their ends before the mob in Cromwell’s England, plays that seem far more affecting that they have any right to be.

As her work with the Masons takes its toll, Catherine’s hard-won peace of mind beings to suffer. After Mike breaks up with her with no explanation, Catherine discovers that Tara, the woman who drove Catherine out of her old job, has seemingly re-entered her life and seduced Mike for the sole purpose of continuing her torment of Catherine. Catherine’s own mental health begins to decline, with her trances making a comeback after an absence of many years. She begins to have dreams and visions of episodes from her childhood, episodes that suggest disturbing connections between her and the mysteries of the Red House. As she finds it harder and harder to escape both Edith and the Red House, Catherine begins to realize that something Mason did decades ago has come back to life and is on the prowl.

To be honest, it’s a bit of a folly to look at The House of Small Shadows in terms of plot. More than any of Adam Nevill’s previous works this is a novel of atmosphere, one that immerses you into the stultifying world of the Red House and Catherine’s declining mental state. While I usually approach horror novels with curiosity rather than apprehension, The House of Small Shadows is the first novel in a long while to leave me genuinely rattled. As someone who can relate to Catherine’s problems, it was easy to put myself in her position and imagine those pressures, both human and otherworldly, grinding me down.

For people well-versed in horror literature, the influence of the cult horror writer Thomas Ligotti will be obvious to spot. Nevill makes no secret of the fact; in the acknowledgements he describes The House of Small Shadows as something of a love letter to Ligotti’s work. The connections can easily be found at the surface level, with derelict houses filled with decay, degenerate little towns, puppets, mannikins, the blurring of identity between the animate and inanimate, and protagonists who perceive their worlds through the haze of mental illness. M. H. Mason even describes the ultimate message of his ratty war dioramas as being “we are all vermin under the stars”, a Ligottian sentiment if there ever was one. However, Nevill goes beyond such easy references by adapting Ligotti’s own approach to horror. A great deal of horror tends to operate as what Farah Mendlesohn dubbed “intrusion fantasy”: something from the outside inserts itself into the world, and the characters who encounter it either succumb or force it out and restore normality. By contrast, Ligotti takes his cues from Lovecraft and creates his horror by estranging the real. In Ligotti’s stories characters often encounter the alien and supernatural, but the horror comes from the realization that these forces are just as real as anything else in the world, and that reality itself is far more alien and threatening than we had imagined it to be. In The House of Small Shadows the horror comes not from Catherine being unable to escape her situation, but from the fact that escape was never possible to begin with.

Still, Nevill is a canny enough writer to not slavishly copy Ligotti. The novel itself is framed as a haunted house story, and Nevill does a superlative job of integrating elements of Ligotti’s work to build the Red House into something far worse than a normal spooky manor. Nevill is also more accepting of psychology than Ligotti, and Catherine herself is a superlative creation. With Catherine, Nevill perfectly captures the thought processes of someone who’s been used and abused by people throughout her life, and how she internalizes this abuse and inflicts it on herself. He even goes so far as to incorporate the stop-breathe-identify-question process of someone who’s been treated according to the processes of cognitive behavioral therapy, a methodology I have a, shall we say, intimate familiarity. While some readers have criticized Catherine for not doing enough to push back against her situation, this never felt like a flaw to me. From her own experiences Catherine has internalized the idea that she is too weak to directly confront her bullies, an belief that her therapy has not yet successfully overturned. Therefore, Catherine reacts not with defiance but with bloody-minded stubbornness, trying with all her might to hold on until the bitter end.

If I had to criticize The House of Small Shadows, I would have to admit that it runs into the problem of Ligotti’s style only being sustainable in short bursts. There were times around the two-thirds/three-quarters mark where even I was wishing Catherine would stop trying to rationalize her situation and honestly look at what is unfolding around her. Still, that is a minor quibble compared to everything else the novel offers. The House of Small Shadows is a superlative novel, and one I heartily recommend to anyone whose tastes dwell on the borderland where horror and weird fiction meet.

Like Loading...
This entry was posted in Book Review, Spooktober and tagged Books, Horror, Spooktober 2019. Bookmark the permalink.